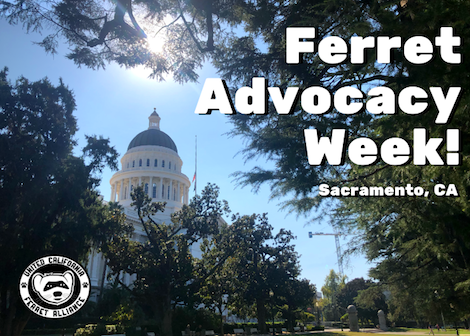 Our Reality Check:  In less than a minute and a half our meeting ended with a door being used to usher us out of the office. This was how our last meeting of the week ended.

Please, don’t get outraged at our legislators or their staff because of this encounter; we’ve found some are willing to meet with our new group.  However, this is the reality of the situation.  We did not have a scheduled meeting with this office, so they were not expecting us. We stopped in to introduce ourselves and inquire about a rumor we had heard earlier in the week from a legislative aid. The Legislative Director was quick to set the record straight and did not want to engage with us further.

The majority of Sacramento (our politicians, staff and agencies) go out of their way to avoid the ferret community because many of them have been harassed, targeted, had rumors started about them and have had negative experiences when dealing with another long- time running ferret organization. This is not our opinion, but what we have been told by the people we need support from in order to change the ban on ferrets.

We would like to thank the Sacramento area ferret advocates who joined us for these legislative meetings. Your support and dedication to the movement is much appreciated. You all were fantastic additions to the cause!

Our recent advocacy week took 2.5 months of hard work to organize. We traveled to Sacramento with 13 scheduled legislative meetings and added two more while we were there. The grand total was 15 legislative meetings for ferrets. Not all our meetings were as dramatic as our last. The majority were informative, professional and productive. About half of them brought up a well-known ferret organization and how they were happy to see new advocates coming forward.

Capitol meetings are normally 15 or 30 minutes long. We were extremely fortunate that 8 of our 15 meetings lasted for 45 minutes. We had the opportunity to do a lot of educating, as well as, obtained insight to help our cause.

We already know the ferret movement needs more research and data. We have a great team of volunteers who have been working on the “to do” list since July. After our meetings, we added a few more needed reports and studies to that list.  These will help us better advocate for ferrets.

We also left with a list of additional people and organizations that we need to approach. We’ve already contacted over 600 organizations, political, state and federal offices this year and are always pleased to learn about other potential support.

A very telling and continuous problem persists in how many negative comments we hear about another ferret organization.  Our first order of business is to assure our legislators that we are not affiliated with that group when they bring them up. Below are some of the comments shared with us by legislative offices:

– “I cringed when I saw ferrets in your meeting request, but we meet with everyone”;
– “I’ve received those updates for years, but your email was much clearer and more professional”;

– “There was a rumor that a legislator was going to sponsor a bill a few years ago but was pressured too much and backed off”;
– “I get those emails every week” (with a laugh);
– “I watched the Fish & Game hearings. They can’t just change the word “wild” to fix this issue”.

These are just some of the negative comments made to us, without solicitation, from several different legislative offices in reference to a long  running ferret group.

The ferret movement has a million hurdles to clear in order to change the law. The biggest hurdle to overcome is the extremely negative reputation of the ferret movement that was tarnished long before UCFA was established.