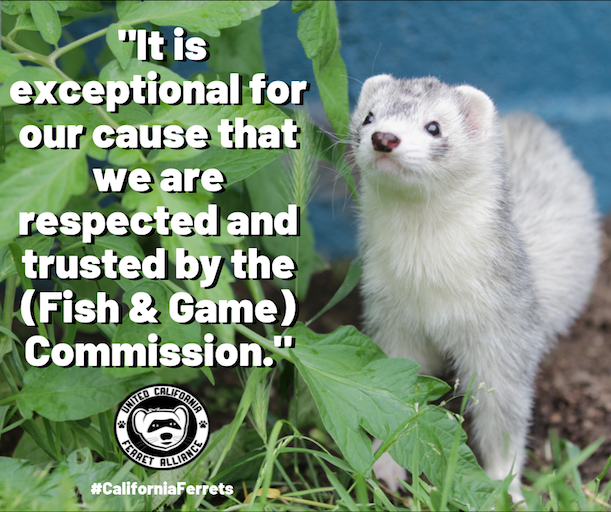 The petition requested the Commission to not classify ferrets as wild. As their staff translated it in the agenda it would “remove ferrets from the restricted species list.” It may seem like a an obvious yes, but unfortunately the law keeps this from being the path to take. You can read the statement we presented here.

The petition was denied as expected.

The President of the Commission did say that he didn’t know ferrets are domestic. Like most people in California, he and other Commissioners, need to be educated about ferrets. UCFA can do that now because we’ve built a trusting relationship with this state agency and they listen to what we say.

Mr. Wright, the person who runs Legalize Ferrets, did requests coffee or lunch with the members of UCFA. We declined due to other meetings we had planned for the afternoon. Our four members, a non affiliated ferret supporter and Mr. Wright, spoke for less than five minutes outside the facility. We shared with Mr. Wright, the information that our team of professional advisors & lobbyists have shared with us. The sentiment, is that over the last 15 years, the reputation Mr. Wright’s aggressive and combative tactics have given the ferret movement hinders the ability of the cause to partner with organizations and political allies we need to change the ban.

We also informed Mr. Wright that as an organization we choose not to reply to his emails or phone calls, like many of the politicians and organizations he tries to work with. He twist what is said and uses it against them. Shortly after this Mr. Wright walked away from the conversation and left the facility.

After the hearing we met with the Commission staff and we are happy to report that we have their full support. They agree with our detailed approach to change the ban on ferrets. They even asked us about our conversations with the Sierra Club.  They trust that information we provide them will be accurate. It is exceptional for our cause that we are respected and trusted by the Commission as the informed leading organization regarding ferrets.

We also met with the lobbyists of opposition organizations. We discussed past legislation and what their concerns were as well as our approach to amending the ban. They were understanding and helpful, providing feedback as well as contact information of people within their organizations that would be willing to meet with us further. Bill Gaines, one of the most well known opposition lobbyist to the ferret movement, even complemented us on our logo. He liked the ferret.

The last meeting we had was with a group of Fish & Game officers. They were honest about confiscations and that they get involved when they have to. They brought up a difficult situation from about 20 years ago in San Diego. They suggest not taking your ferrets out in public. They also have to get involved with any reported bites. They are after all, law enforcement employees and will uphold the law when necessary. That doesn’t mean they enjoy removing pets from people’s homes. When confiscations do happen they try to arrange for shelters in neighboring states to come get the animal.

The biggest accomplishment today was the unexpected meeting with the Commission staff immediately following the hearing. We have a strong relationship with this government agency who’s support will help us moving forward. Overall UCFA had a productive day. Our advocates did a wonderful job professionally representing the moment to government officials and organizations. We look forward to growing our political network and the future of the cause.